How It All Began

John, a Navy veteran, graduated from Chicago’s Coyne Electrical School. He was working as a supervisor for an electrical contractor when a project manager asked if he had an electrical license. “Yes,” responded John. The project manager wanted to know if he had ever considered starting his own business. In June of 1975, John decided to establish his own business after much thought. John is photographed with his first corporate truck.

We will continue to grow with our cherished clients and welcome new ones thanks to our long-standing position in the sector. Brandon, Mike’s son, joined the organization in March of 2017. 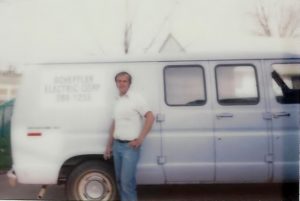